Strand Outfitters is one of the Eastern Capes leading Menswear and Schoolwear retail stores. For over 100 years Strand Outfitters has been providing clothing brands of the finest quality to the people of East London. We also offer a Suit Hire service with a wide variety of suit styles and accessories to choose from.

THE HISTORY OF STRAND OUTFITTERS

Humble beginnings in the Strand Hotel in 1920

Frank Hunter had come out to South Africa from London in 1900 to work at Gibbard and Bryant in East London. He had previously worked as an apprentice at a large department store in London.

In 1904 Frank opened his first store Hunter and Co, a drapery store in upper Oxford Street in East London. His fiancé Alice joined him from England and they were married that year.

In 1909 Hunter and Co expanded and moved to 116 Oxford Street (the site currently occupied by the Strand Outfitters Oxford Street branch). Mr King joined the business as a partner and the business was renamed Hunter and Kings Drapery Store.
In 1914 Frank and Alice returned to their and the family returned to England for one year to see family and to do buying for the firm. In August 1914 War was declared by Britian on Germany. Frank decided to join the war effort and dissolve his partnership with Mr King. Frank worked in a warehouse handling cloth for the uniform of the fighting forces.

In 1917 the family returned to South Africa unfortunately Frank never received his share of the capital of Hunter and Kings and the business had been closed while he was in England. Frank worked as general manger of Baker King and Co in King Williams Town until 1923. 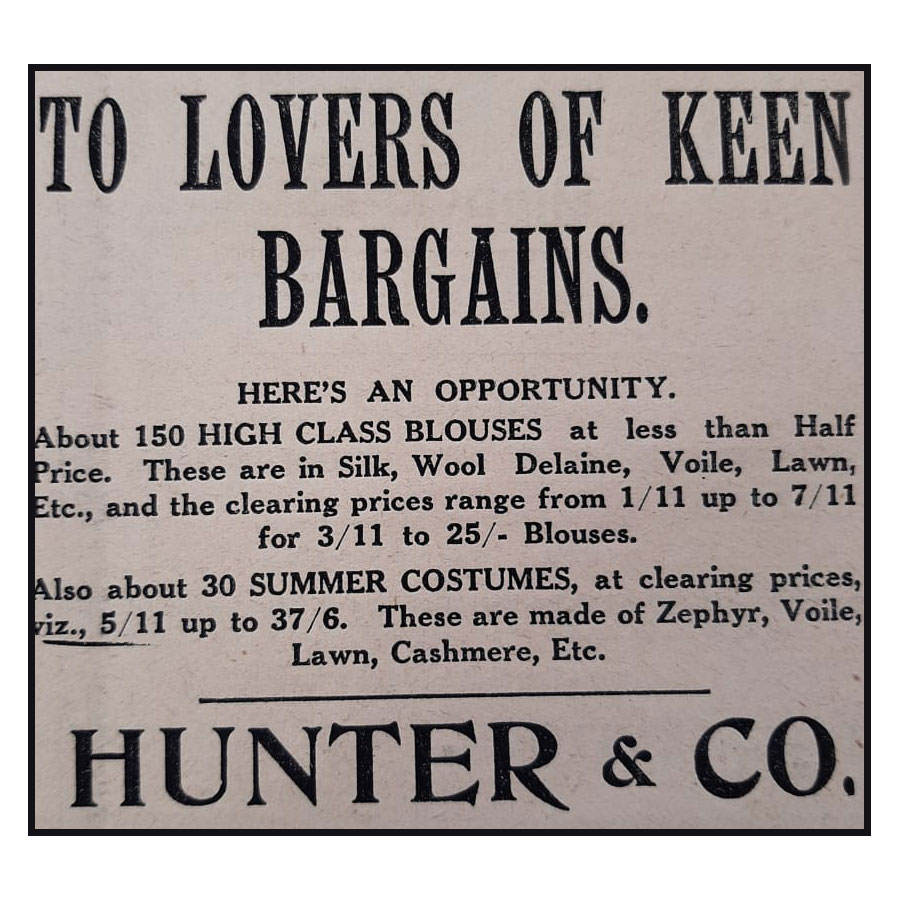 As appeared in the Daily Dispatch on
Friday, 29 January 1909

Strand Outfitters was established in 1920 in the Strand Hotel. In 1923 the store was purchased by Mr Francis George (Frank) Hunter.

In 1923 Frank went to East London and stayed overnight at the Strand Hotel. When he mentioned to his friend Mr Greeves, who owned Strand Outfitters a small outfitting shop located underneath the hotel, that he was looking to purchase a business Mr Greeves replied “I will sell you mine”

Frank Hunter passed away in 1946 and Fron Hunter took over the running of the store. Fron and his wife Violet worked together in the store for many years. They had three sons John, Neil and Peter and a daughter, Jean. Their three sons would all join Fron and Violet in the business.

The company opened a second store Hunters Menswear in 1964 in Terminus Street. Neil Hunter ran Hunters until he retired in the early 2000’s and the business was closed.

Fron Hunter retired from the business in 1972 and John Hunter and Peter took over the running of the Strand Outfitters store while Neil ran Hunters.

A third store Prestons Menswear was opened in 1976 also in Terminus Street. Peter left Strand to run Prestons until it was decided to close the store in 1993. He then returned to work with John at Strand Outfitters.

John passed away leaving Peter to carry on the business with the help of his son Simon (4th generation) who joined the business full time in 2015.

A second Strand Outfitters branch was opened in the suburb of Vincent in the Patcyn Centre in Frere Road.
Go to Top